The next generation of St. Louis’ architects and designers is getting an early start on their skills. They’re building their futures, literally, through the Alberti Program, a problem-solving workshop that combines architecture, sustainable design, and creative and critical thinking.

The program is geared toward students in fourth through ninth grade in St. Louis Public Schools and surrounding districts and was started in 2007 by Bruce Lindsey, who is dean of the College and Graduate School of Architecture & Urban Design at Washington University in St. Louis’ Sam Fox School of Design & Visual Arts. In the past nine years, more than 600 children from more than 145 schools have gone through the program.

“The idea of the program is that the kids learn about the process of problem-solving,” Lorberbaum says. “They have to come up with two- and three-dimensional solutions and learn how many factors are involved in the problem-solving process when it comes to designing spaces for people. I develop a project, and they work for an hour. It’s so exciting to see what these students can do and how quickly they’re able to integrate six or seven variables.”

The classes begin with a guest lecture. Lorberbaum brings in a wide variety of professionals to give the students a diverse understanding of the worlds of not just design, but also much more: Lecturers encompass areas of architecture, science, art, humanities, design and even “cool businesspeople,” according to Lorberbaum.

For the past five years, Tom Peterson, a principal at Mackey Mitchell Architects, has helped out as a guest lecturer with the Alberti Program. His involvement began because he and his significant other, Sue, are both architects and are in the process of renovating a 100-year-old Southwestern Bell Telephone Co. building into their home.

“It’s the perfect vehicle to teach kids lessons about architecture, design and problem-solving,” he says. “They throw out crazy ideas for what we should do with our building. As you become an adult, reality sets in. But these kids are unencumbered by reality, and the ideas just pour out of them.”

Peterson’s lessons have ranged from creating a potato gun to roof demolition. He’s taught kids about the molecular level of wood using a bundle of drinking straws and uses salvaged bits and pieces from thrift stores often, like old ski pole grips as handles for the potato guns. “Reusing discarded components not only teaches sustainability, but it also encourages creative thinking,” he says. “Sue and I have been really inspired working with this program. The kids are at the age where their creativity isn’t hindered by the reality of growing up.”

Alberti Program workshops are free for students and take place every Saturday afternoon during the fall and spring semesters on the Washington University campus. A summer session also takes place daily during the month of June. Lorberbaum and guest lecturers are aided by 25 or so Washington University graduate and undergraduate students who serve as teaching assistants, as well.

“We work hard to get kids from everywhere in the greater St. Louis area,” Lorberbaum says. “The majority of the kids are from families who couldn’t otherwise afford a program like this.”

On average, the schools are 50 percent low-income and 60 percent minority-comprised, which directly tie into Lindsey’s original mission of the program. “I started the Alberti Program for two reasons: one, because the profession of architecture is notably (not) diverse,” he says. “I got tired of hearing excuses as to why that is. The second reason is because there are almost no environmental design classes in middle and high schools. The opportunity for students to be introduced to the field is almost nonexistent. We knew introducing the field of design to young people would have positive long-term effects.”

Lindsey notes that the program started with only eight students. He says that through “the amazing connections of (Lorberbaum),” the program quickly took off, with 100-plus students per session during the school year, and 40 in the summer.

“We see this program in some ways as a recruiting effort to introduce these talented students to the field of architecture and design,” he says. “Many of these students have never set foot on a university campus, so it’s been great to have them here in the school.”

Lindsey’s goal for the future of the program is to create a more deliberate pipeline for the students. The program has been offering scholarships for the school’s Architecture Discovery Program, which runs for two weeks in the summer between junior and senior year of high school, with the hopes that these programs lead to past, present and future Alberti kids’ acceptances to schools of architecture.

“We just want to have stronger channels for our students to pursue their interests,” Lindsey says. 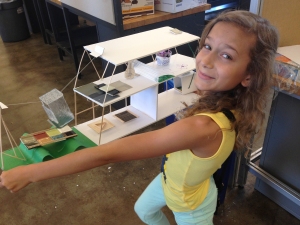