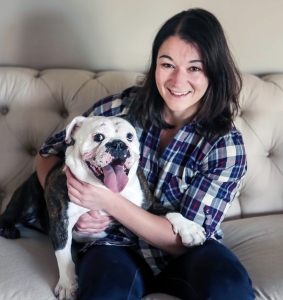 Once upon a time, a utility worker was turning off the water at a home and found an English bulldog alongside six pit bull terriers in deplorable condition. The worker called the police, who contacted animal control.

The bulldog, Elliot, was 2 years old at the time and weighed only 25 pounds. He was covered with plaque scabs, and his feet were swollen and infected. When the vet contacted St. Louis English Bulldog Rescue, Elliot was in danger of organ failure. The rescue organization worked with animal control and the vet to come up with the best plan for Elliot, since he couldn’t be released for 10 days. In those 10 days, however, the pup gained 8 pounds and was more alert.

He became healthier and was in foster care for a year. Though his various foster parents met his needs as he recovered, he still hadn’t found a forever home.

Lily Bogunovic had fostered bulldogs for the organization in the past, and after her bulldog passed away in December 2015, Bogunovic was bulldog-less. In January 2016, she agreed to foster Elliot.

“At this point, he was needing weekly baths, had allergies and was on multiple antibiotics,” she says. “I had him for a while, and I just got to the point where I wanted to keep him.”

Bogunovic says Elliot is the smartest bulldog she’s ever had. Though he has permanent scarring on his body from mange and past neglect, he’s a “happy-go-lucky dog.”

“I moved from my condo out to Chesterfield, so he now has a yard and a doggy door,” she says. “He also has a French bulldog sister!”

Bogunovic is really into CrossFit, and Elliot has sort of become the gym’s mascot. “He loves to come hang out with us, and everyone knows and loves him,” she says. “He loves to go for rides in the car.”

Once a month, Bogunovic makes his food, since his allergies don’t really allow for consumption of regular store-bought food. She also has to bathe him regularly, which is a process Elliot has come to protest.

“When he knows there’s a bath coming, he’ll lie down and roll over so it’s harder to get him to the bath,” Bogunovic says.

Though caring for Elliot’s particular needs is a little different from regular dog care, Bogunovic loves how sweet and loyal he is.

“I’m shocked he has such a lovable, friendly demeanor considering how he was treated in the past,” she says. “Rescue dogs are just so appreciative. When you save them, it bonds you immediately.” 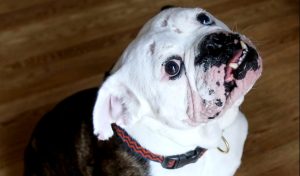