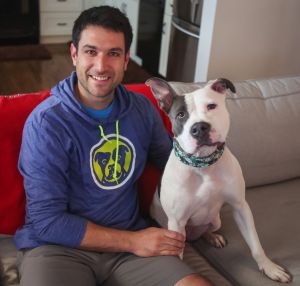 Once upon a time, Shiva the pit bull was left for dead. She had several facial scars and a bad infection in her tail that left most of it useless. She was picked up by one of the animal crews in St. Louis in November 2016 and was taken to get cleaned up.

The name “Shiva” means transformation and was a perfect fit for the rough road the pup would have ahead. The Even Chance Pit Bull Rescue team knew she’d have to have surgery to remove most of her tail, but it would be an expensive procedure. Miraculously, Jamie Buehrle, wife of Major League Baseball player and St. Charles native Mark Buehrle, saw the post about Shiva online and donated the money for the dog’s surgery.

Enter Tony Quartuccio, who’s currently dating Even Chance vice president and director Heather Roberts. Quartuccio was interested in getting a dog, and Roberts knew exactly whom he had to meet.

“We went to a Christmas event at a pet store, and I had the opportunity to take a bunch of pictures with Santa and Shiva,” Quartuccio says. “I filled out an application [to adopt her] immediately.”

He adopted Shiva officially a few weeks before Christmas – the perfect gift.

“She’s improved so much since her surgery and since her adoption,” he says. “Sitting was really hard for her at first, so we had to work on that when her tail had healed.”

Since her adoption, Shiva’s learned to sit and shake on command. Quartuccio says he recognizes that she’s had some trauma over her short life, so sometimes it’s hard for her to learn things.

“I’ve had her for a while, but she still tries to go through the hinge side of the door,” he says with a laugh. “I don’t think she’s all there, but she’s the absolute best.”

Since she’s still pretty young, Quartuccio says Shiva frequently gets the “zoomies,” where she just runs around like a maniac. In one of these running fits, she was going full-tilt through the house and jumped up on the buffet table.

“She knocked everything off and then realized she didn’t know how to get down,” Quartuccio recalls. He had to pick up his 60-pound pup to get her down off the table.

Shiva is also a bit of an attention hog and will demand to be loved if Quartuccio is in the middle of something else.

“If I’m doing dishes or laundry, she’ll sit there and stare at me like, ‘Please love me,’” he says. “She’s so great.”

Quartuccio says he’s had dogs his whole life, but Shiva tops them all.

“She’s so loving and attentive, and her overall demeanor is amazing,” he says. “She’s the perfect remedy for a hard day.”