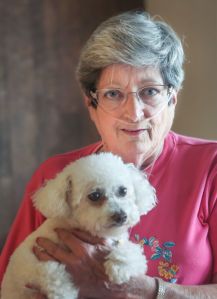 Once upon a time, Needy Paws rescued a little white fluff ball named Chloe. When she was rescued, Chloe had kennel cough and tested positive for heartworms. Just when the Needy Paws staff thought she was out of the woods, Chloe tore her ACL, probably due to a patellar luxation on both knees. The little dog had one surgery for each knee and then underwent therapy.

Around the same time, Barb Tymkew was browsing the internet for a lap dog companion. Since Tymkew’s Chronic Obstructive Pulmonary Disease requires her to consistently be on oxygen, the dog would need to be low-key and possibly older. She found Needy Paws’ website, and Chloe was the second dog she saw.

“I wanted a dog that was completely house and crate trained and was basically a lovable little fur ball,” Tymkey recalls. “When I saw Chloe, I contacted them right away and put in an application.”

Fortunately, the woman who was fostering Chloe lived in Affton, where Tymkew lives. Chloe’s foster mom said she’d like to bring Chloe over to visit, and Tymkew agreed.

“At the time, my husband was in the nursing home,” she says. “I was hoping Chloe would be good for him, too, and could just sit on his lap.”

Unfortunately, Tymkew’s husband passed away before she could adopt Chloe, but the little dog was ready to go to Tymkew when she needed her the most. She adopted Chloe officially in, and the two have spent the last few months providing each other with love and support.

Though Chloe’s age is unknown, Tymkew says she thinks the little dog is around 6 years old. After her surgeries, though, going up and down steps is hard on Chloe, so Tymkew’s son built the pup a ramp that allows her to go up and down stairs with ease.

Chloe’s exact breed isn’t known either. Although her adoption papers say she’s a miniature poodle, Tymkew thinks she might have some Bichon Frise in her, too.

“Her fur is curly like a poodle, but when I have her groomed, it’s so soft,” Tymkew says. “Regardless, she’s exactly the right size and loves to go with me wherever I go.”

Although the little dog is easygoing and loves to sleep on Tymkew’s lap, sometimes she think she’s a lot bigger than she actually is.

“When I first took her to my son’s house, she barked and barked at his lab that’s three times her size,” Tymkew muses. “They’re fine now, but it was so funny.”