Australian artist Just A Gent has been producing since his pre-teen years, evidenced by his compellingly composed pieces of music that transcend genre classifications. His diverse musical interests have led him to flip songs of all genres over the years — from Illenium to Whitney Houston — all while sporting a spiffing suit and top hat.

Just last month, he released a wistful melodic dubstep track featuring Thief, “Hold,” that’s been met with glowing reviews. The classy producer is currently on a massive tour with San Holo and DROELOE that’s taken him across North America and will wrap up in mid-December. 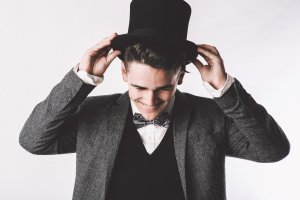 We caught up with the producer to hear more about his style evolution, tour life and what’s in store for 2018.

You’ve produced music of all genres over the years. How has your style evolved?

I’ve been trying to fuse genres together for a long time. I think it’s an essential thing to be able to make more than one style of music whether that be inside the electronic category or anything outside of that, it just helps bring a fresh flavour into music and you can tell when people know more than just ‘trap’ or ‘dubstep’. I think my style has developed a lot since I started the Just A Gent project and with a plethora of other styles and genres out there I hope I can continue to do that.

You’ve flipped everything from Phantom of the Opera to Rage Against the Machine. What makes you decide to flip a song?

Generally the tracks I have been flipping on the Just A Tune project are really solid tunes, some of them are my favorite themes of all time like the Phantom of The Opera “Overture” and the Star Wars “Binary Sunset” and even the “Bing n Bong” remix is a flip of my favourite childhood TV shows, Tiny Planets. I think the song just has to really pop to me and connect with me from the first time I hear it till the 1000th time. I am always open to suggestions though so slide into my DMs with ideas.

How does your creative process differ for your original productions versus your flips?

With the flips, I’m generally just rushing it, finishing the track in a few hours and throwing it up on SoundCloud. There isn’t really a deep and meaningful story or process behind it, it’s just me throwing together a quick flip of a track I love. With my original tracks I want people to be able to hear how much time I put into them and I like to think there is more story behind them. I also just generally put a tonne more hours into the originals and make sure they are perfect before release.

How’s the tour with San Holo and DROELOE going? Memorable moments so far?

Pretty bloody amazing. Every show has been a sold out stellar time and the crowds have been insane. Just hanging out with the dudes and getting to understand Dutch culture a little more has been a blast. They are a great bunch of guys and I am extremely grateful to be touring with them.

What’s your favorite song to play out live and why?

I love playing out my Whitney Houston, “I Will Always Love You” flip. It’s been popping in and out of my sets for the last couple of years, but it’s so great to hear everybody sing it back and then confused as a chameleon in a bag of Skittles when the drop hits.

Where do you see electronic/dance music in 5, 10 years? As someone with a rich music background, do you think the scene/genre is sustainable long-term?

Electronic music is only gonna continue becoming more and more relevant in the mainstream. I think people need to start looking at them producers really changing things up though, artists like Fytch, Former & Nomak have really been inspiring me lately with totally new sounds that I am loving.

So much new music and touring. I can’t wait to share some of my new tracks with everyone, they are definitely a little on the experimental side but we shall soon see what everyone thinks!!

This story was originally published at dancingastronaut.com. Read it on DA’s website here.