Once upon a time, Nancy Slade had a fondness for a particular breed of dog, leading her friends to alert her whenever there was one up for adoption in the area.

“I’ve always had a fondness for Chihuahuas, even though I’ve never had one,” Slade says. “A lot of my friends know I like them, and whenever they see one up for adoption, they post [the photos] on my Facebook wall.”

A friend of Slade’s who fosters for different rescue organizations posted a photo on her wall of a Chihuahua named Romeo from 4 Paws 4 Rescue. At the time, the Slades had a couple of other older dogs, but “this little face just stuck.”

“I showed him to my husband and said, ‘If you had a dog like this, what would you name him?’ He looked at the photo and said, ‘That looks like a Nigel to me,’” Slade says.

Nigel had a name before the Slades even contacted the rescue organization. When she called about him, his foster mom said the pup had been found in Nashville as a stray and was recovering from canine parvovirus, a highly contagious virus that can be life-threatening. She brought him to the Slade house, where the plan was to tell Slade’s children Nigel was a foster. But they all loved him from the moment they met him and knew they’d never be able to part with him. 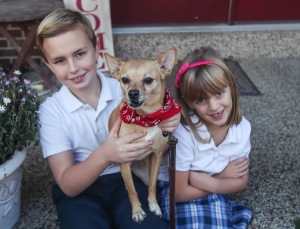 Slade calls Nigel a “very happy guy” who loves to snuggle and burrow under blankets, where he’ll sleep all the way under the covers.

“He’s kind of like a cat,” Slade says. “He’ll sit on the sofa and look out the window.”

Though he’s a smaller dog, Slade says Nigel’s not very vocal unless there’s a squirrel.

“He hates them,” she says. “You can’t even say the word ‘squirrel’ without him freaking out.”

Despite his distaste for squirrels, Nigel is fearless – with one exception. Slade says the only time she saw him afraid was an incident where he got out of the yard. He didn’t go far, and the Slades went on foot to retrieve him since they knew where he’d be. At the top of the street, they saw him running toward them.

“There was a huge hawk flying above him chasing him,” Slade says. “He was running toward us like, ‘Save me!’”

Other than the hawk incident, the 5-year-old pup has an adventurous spirit.

“He’s been on lots of trips and loves to go boating,” she says. “He’ll stand on the chair in front so he can catch the wind and waves. He’s pretty fearless for a little guy. He rules the roost.”