Jim Kirchherr didn’t always want to work in media. In fact, when he was at the University of Illinois Urbana-Champaign, he was studying history with plans to be a social studies teacher. But the now-senior director of content at Nine Network made a “spur of the moment” decision to switch to broadcast. “It was never something I was dreaming about,” he says. “I’ve just always been good with words.”

His way with words didn’t lead him astray. Kirchherr went on to have a successful career in media, including 27 years with St. Louis’ Nine Network. At the end of November, Kirchherr learned he would be inducted into the 2018 class of the Media Hall of Fame for his work with the local public television station on countless broadcasts, digital content, documentaries, public affairs specials and more. He’s won 26 regional Emmy awards, most recently for his work on a program about a Washington University in St. Louis laboratory that was studying the abilities of swarms of cyborg locusts to use their antennae to sniff out explosives. 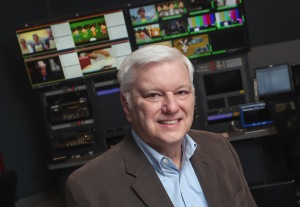 “[The Hall of Fame induction] is a recognition of a very steady output of really good work,” he says. “When you work in public TV, people appreciate that, but you often don’t get a lot of recognition. This is kind of nice.”

When asked about memorable career highlights and milestones, Kirchherr harks back to his first TV job, which showed him he was in fact cut out for the career ahead. It was Dec. 13, 1977, and a plane carrying the University of Evansville Aces basketball team crashed on takeoff, killing all 29 passengers.

“That was the first national story I covered, and it was important to me because I realized how well I could work under pressure and try to organize a newscast on short notice,” he says. “It was an important revelation for a terrible story.”

Kirchherr has been at Nine Network since 1991 and has worked on numerous projects he calls to mind as memorable. At the turn of the century, he produced a nine-part history series called Decades: St. Louis in the 20th Century, which he notes he is particularly proud of. Kirchherr also notes Homeland: Immigration in America as another career highlight – Kirchherr served as a producer and writer on the three-hour documentary series that explored America’s immigrant experience and aired nationally during the 2012 election.

Although he grew up in Chicago and moved to St. Louis in 1978, Kirchherr says his “outsider” lens gives him a new view of the city that born-and-raised residents don’t have.

“Not being born and raised here gives you a different perspective because you tend to notice things that people who grew up here don’t notice,” he says. “Almost anything I notice on the street that catches my eye is something I’m curious about and want to know what the story is.”

“My favorite thing to hear from people after they’ve seen something I’ve done is ‘I’ve lived here all my life, and I never knew that,’” Kirchherr says.

Although sometimes they’re not “earthshaking” things, Kirchherr says this fresh perspective has led him to do things like climb the inside of the Union Station clock tower.

“I’ve driven by that a million times,” he says. “One day I wondered if they’d let me climb it. It took some negotiating, but we took a camera and did it.”

Kirchherr calls St. Louis a well-kept secret in many aspects and summons a quote from writer Theodore Dreiser to describe how he feels about the city. “I learned in time to like it very much, but for the things that set it apart from other cities, not for the things by which it sought to rival them,” the quote goes.

“I think that’s both praiseworthy and somewhat indicative of St. Louis not tooting its horn as much as it should,” he says. “St. Louis could really play to its strengths.”

In his work with the Nine Network, Kirchherr has been able to dig into St. Louis’ strengths and weaknesses alike. He says the most gratifying part of his job is the ability to find and tell stories across the region in a way that’s comprehensive and thoughtful.

“It’s given me the opportunity to do research, to dig into the past, to cover current issues … and do it all well,” he says. “With public television, we have the airtime to do these stories well.”

Where other networks might have only a minute to tell a particular story, public television allows producers like Kirchherr the airtime to delve deep into their topics and really tell the story.

“The challenge for public TV is always funding,” he says. “Changing technologies can be viewed as an obstacle or an opportunity. I think if Nine Network remains a valuable resource, the quality of content is always going to be a top priority, not necessarily the tools.”

#mcm #andeveryday #becausemarriage ❄️
I don’t really ever have the words to fully express how much I love these four. They’re everything to me 🌲❄️ #wcw #itscold
One week down 💍 #zachmanandrobyn20
Where to even begin? I love you so much. I can’t wait for our life together 💞 #zachmanandrobyn20 (more photos coming soon, I promise)
happy anniversary to my two favorite lovebirds 💞 #36years #parents
garden glow 2k19 🎄