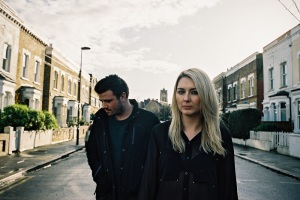 At the end of July, UK duo Koven debuted their third Monstercat single of 2018, “Voices.”

“Voices” had been in the works for some time. In mid-May, Koven’s Katie Boyle popped up on Monstercat’s social media in a video, asking fans to submit vocal samples for a forthcoming song. She gave an example of the kind of material the duo was looking for, and the submission process began. Boyle and her Koven partner Max Rowat ended up with dozens of submissions and used them to create the intensely emotive track, which came out July 27.

We caught up with Boyle to hear about the process of creating “Voices” and what’s next for the duo in 2018.

Where did the idea come from to get the fans involved in the making of “Voices”?

I had noticed before that a few artists had done something similar, but their fans would send in samples they had created, and then the artist would make a track out of that, so I just thought, why couldn’t we do this with but people can send in their vocals. Instantly I thought, “but a lot of people might not have access to a microphone or recording equipment” but then I remembered back to recording my first single around 7 years ago, and the vocals were just recorded on a built in iMac microphone, and of course it didn’t sound amazing but I think it actually added something different to the track. Nobody noticed it. So as well as getting people involved in something they may of not thought they would/could do, it was also an interesting idea to see what would happen if people recorded on what they have available to them, whether it’s a mic/phone or a webcam.

How many vocal samples are featured in the track? What was the process like for working with them?

We had around 100ish vocal submissions. Firstly I spent some time going through each submitted track and just listening to it by itself, and then the idea was to just import them into a project and just press play and see what it sounded they all sounded like together without any editing. I remember feeling quite nervous before pressing play as I had no idea whether this would work or not, but thankfully everyone sounded amazing together. I didn’t want to do too much editing to them as I didn’t want just 60-70 auto-tuned vocals. I then just put them all through a reverb and imported into the main ‘Voices’ Project.

Are you interested in using more fan-submitted material in some capacity in the future?

Yes it was an awesome process and the feedback has been great. I’d be keen to try it again, but this time with lyrics.

What does “Voices” mean to you?

I think for us, the experience of making the track was really special as we were so overwhelmed with how many people wanted to get involved. There were those who sent us their vocals and those who contacted us to let us know they were too nervous or scared to submit but they really appreciated the opportunity all the same. So for us the track will always be a representation of the fans and how much everybody cared. It was very special for us to learn this.

We are super close to releasing our new ep ‘Reality Reach’, once that’s out we will be fully focused on our first album! We’ve got some great ideas already in the making for the album and we are so excited to get that finished up and released, it’s been along time coming, we can’t wait!

How do you see your sound evolving in the future?

We are just a few weeks away from releasing our next ep. I feel like we are at a really good place musically at the moment, where we feel confident with what we are making – which hasn’t always been the case. Every time we release a track and the feedback is positive it takes you forward a few steps with being able to try new things, as well as taking note of what has worked well in the past. We’ve got some great ideas already down for the next process which will be our first album.