Ellen Pendry had always been creative, but she never envisioned becoming a boutique owner.

Pendry had been teaching high school art for a few years before learning she was pregnant. Although a St. Louis native, she and her husband were living in Chicago, looking to return south. When he got a job and they moved back to St. Louis, Pendry was 34 weeks pregnant and knew trying to find a job at that point wouldn’t be logical with the baby’s impending arrival.

After their baby, Corinne, arrived in July 2015, Pendry found it difficult to be a stay-at-home mom with no creative outlet.

“I didn’t have a background in sewing or anything, but I just kind of went out on a limb,” Pendry says. “I wanted to make Corinne’s baptismal gown out of my wedding dress.”

She enlisted her mom (“who had made a thing or two for Halloween”) to help Pendry cut up her beloved wedding gown and was pleased with the results.

“After that, I realized how fun it was and wanted to make baby clothes to sell on Etsy,” she says.

And thus, Blue Mark Handmade was born. Pendry named the company after her very first sewing machine: a powder-blue Mark II from her grandmother. The name, to Pendry, contains the perfect amount of sentiment and professionalism.

Pendry, frustrated by the kids clothing market and its incessant sparkles and glitter, set out to craft a line that was more classic and sophisticated.

“I want my kids to wear kid versions of what I would wear,” she says. “That’s how I pick my fabrics.”

Comfort and fit were also key to Pendry’s initial efforts. As Corinne grew and after her brother, Wilson, arrived last October, the children’s mother realized the need for clothing that could be worn both to church and for play. Pendry wanted practical options – not something she’d spend too much money on only for her child to wear once. She works with knit organic fabrics in solid colors and florals, creating pieces like rompers, skirts, dresses and more.

“As far as pieces go, I will not sell anything I wouldn’t put on my own kid,” Pendry says. “These are pieces kids are comfortable being kids in.”

Some of her most popular items include twirl dresses (which Pendry says 3-year-old Corinne is obsessed with) along with peplums. All of her pieces are sold through her website and Etsy, where she has more than 200 five-star reviews.

“I’ve been humbled to hear such good things since starting Blue Mark,” Pendry says. “I hear from people that my clothing items are some of the best-quality handmade pieces they have.”

Since its inception in October 2016, Blue Mark Handmade has grown to fit each season. Right now, Pendry’s gearing up for her fall line, solely available on her website, which she’s excited to promote.

“I have the best fall colors,” she says. “I’m all about olive green, burgundy and warm, rich colors.” 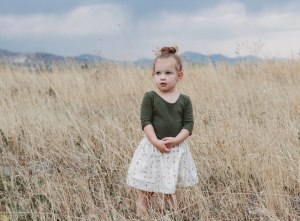 She’ll be operating a bit differently this fall, though. Halfway through this summer, Pendry made the decision to switch from the made-to-order basis she was creating items from, to ready-to-ship pieces. She decided to make the switch to be able to stock up on pieces when she has time and focus on caring for her 3-year-old and 10-month-old.

Pendry moderates a VIP Facebook group for Blue Mark and has been receiving excited comments about her upcoming items. She says she’s been met with enthusiasm about the fall line’s bubble rompers with long sleeves – perfect for transitioning into autumn months.

As for the future, Pendry is looking to get her products into more stores and pursue wholesale endeavors. Blue Mark items aren’t currently available anywhere but online, but Pendry would love to be able to bring her pieces to local shops.

“It makes me feel good that I’m sending out good-quality clothes and that kids want to wear it because it’s comfy,” she says.