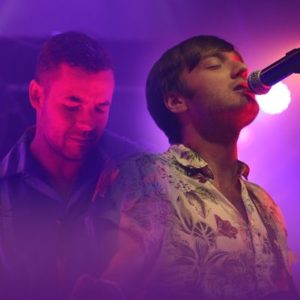 Long gone are the carefree days of our youth. The breezy, blissful moments of our childhood have faded away into adulthood,

and The Midnight take time to reflect on those times gone by in their new album. Though vocalist Tyler Lyle insists that “we are not a sentimental age,” the duo’s latest venture may suggest otherwise.

The nine-track Kids contrasts its somewhat darker predecessor: 2017’s Nocturnal, which was primed for late-night drives with its dramatic saxophone riffs and shadowy, intense undertones. Kids, which was released on Sept. 21, has an entirely different feel to it.

Set in 1985, the LP is ushered in by “Youth,” a shimmery track layered with audio snippets of broadcasters and children talking about the rise of computers and video games and what the technology could mean for the future of the world as it was known at the time. The album’s next track, “Wave,” starts much the same way, but it morphs into something much more recognizable as The Midnight’s style. Lyle’s vocals make their album debut on this track, insisting that “we are not a sentimental age,” and cites not wanting parents’ china and hooking up with strangers, never to be seen again. The album’s namesake track is broken into two parts: a prelude that follows “Wave” and a reprise that wraps up the collection. The prelude takes a somber tone, as Lyle sings wistfully about the arcade closing and monsters in the spare bedroom.

“Kids are sad, the sky is blue
There are monsters in the spare bedroom”

Its forlorn theme carries into the introduction of the previously released “Lost Boy,” a clear album standout. The duo teased the track’s July release by pairing it with clips of emotive scenes from Stranger Things, as the filtered vocals serenade, “I was a lost boy when I met you.” A soaring guitar melody accentuates the song’s themes flawlessly, leading out into into a brief interlude.

“‘Cause in the dark there are no strangers at all”

Cereal hits the bowl as a kid flips through the television channels in “Saturday Mornings,” finding commercials for The Tranformers, Blockbuster video, Atari Games, and more. The interlude gracefully delivers the listener from a carefree weekend morning to the empowering, adventure-filled “Explorers.” The Midnight pay homage to the explorers of the ’80s, giving a hat tip to the “spark-igniters,” the “Lost Ark Raiders,” the “lion-tamers.”

“Let it be said, and let it be known
He who is free is never alone”

Its hopeful undertones merge into the equally hope-filled “America 2.” Lyle’s vocals tell the tale of going to look for “America 2,” backed by the duo’s signature guitar melodies and retro synths. When it was released in August, the artwork for “America 2” depicted an ’80s-era mall, with a sign reading “permanently closed.” The neighboring arcade, however, was still lit up in its hazy neon glow, leading The Midnight to one of the LP’s final songs, “Arcade Dreams.” The instrumental track twinkles with a plucky melody and a dreamy atmosphere.

“We grow up and move away
The seasons pass, but the monsters stay”

To close out their latest endeavor, Lyle and Tim McEwan have tapped the West LA Children’s Choir to truly bring the kids to Kids. They bring back the theme from the prelude in a six-minute rendition that spans from an introspective guitar segment to the simple and sweet vocals children’s choir, summing up the LP’s overall contemplative and nostalgia-filled aura.