Cecily Hoffius and Judith Bellos have been in business together for 37 years. In the decades they’ve run Ces & Judy’s Catering, they’ve seen the rise in the wedding industry and its plethora of opportunities. Intrigued by the possibilities, the successful duo shut down their Frontenac location to start a new venture: The Venue at Maison du Lac.

Previously, Hoffius and Bellos would visit friends of theirs who lived on a gorgeous 20-acre piece of private property in Catawissa, Missouri, less than an hour from the metro area. The property featured an 1840s stone house and sat right on a breathtaking lake.

“It feels like you are in another country,” Hoffius says. 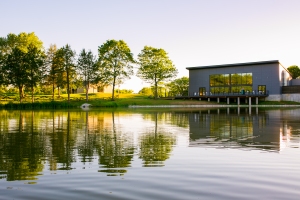 When she and Bellos found out their friends were putting the property up for sale, they jumped at the chance to convert it into a wedding venue. They purchased the piece of land two years ago and got to work. As with any project, “It took longer than expected,” Hoffius says. They started construction in December 2017 and had their first wedding in July.

Due to its “another country” feel, The Venue at Maison du Lac has attracted engaged couples across the Midwest – especially those who want a getaway-type atmosphere without the lengthy travel.

“The thing that pushed us in this direction was all the people who seemed to be looking for what felt like a destination wedding but didn’t want to get on a plane,” Hoffius says. “We’ve created a destination that’s easily accessible from St. Louis.”

The premises feature a minimalist, modern building that the duo calls “the perfect blank canvas” for weddings of all shapes and sizes. It’s 7,000 square feet with high ceilings and large windows and features a deck overlooking the lake. The 19th-century stone house provides the perfect backdrop for photos and also serves as a luxury bridal room.

Hoffius and Bellos liked the idea of contrasting the rustic, countryside feel of the surrounding area with a modern steel-and-glass building, and architect Peter Tao was able to design something that fit the vision.

“We try to keep the building simple inside so the couples can turn it into anything they want,” Hoffius says. “The building sits right at the edge of the lake looking back at the stone house, so it’s a beautiful setting. We even purchased a small property next door to create a parking lot so we didn’t have to take out any trees.”

Since the site’s first wedding this past summer, Hoffius says she and Bellos have hosted three others, along with a post-funeral luncheon, a rehearsal dinner and a few parties. Though they haven’t hosted one yet, Hoffius says the space is also ideal for corporate retreat-type getaways. Despite the glass and steel, the sound quality inside is impeccable, and visitors have an opportunity to fish and explore the great outdoors, as well.

“It’s been exciting and a lot of work,” Hoffius says. “Judy and I are the ones taking visitors on tours, and we’ve had a lot of interest. We don’t quite have the landscaping look quite finished, but we are doing a lot of planting now and through the fall.” 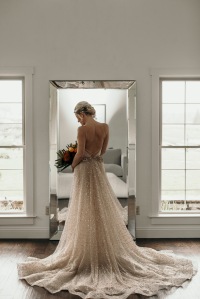 When asked what sets The Venue apart from other wedding and event spaces, Hoffius doesn’t skip a beat.

“The setting is what sets us apart,” she says. “It’s just so beautiful out here. It’s relaxing.

After 37 years in the catering business, Hoffius and Bellos have seen countless events take place. They know what little things can really make a wedding day pop, and their new venue venture gives them the opportunity to bring that to their customers.

In addition to The Venue’s use as a prime spot for weddings and other events, the pair plans to host events for people in the Catawissa area.

“We’d love to do things in the coming years that are more inclusive to people in the area,” Hoffius says. “We could host movie nights and music nights for the public and give people a chance to see this beautiful spot.”

Hoffius says people ask her all the time when she’s going to retire, but it won’t be anytime soon.

“Long term, Judy and I just hope we are busy every day,” she says. “We love this business, and if we didn’t love it, we wouldn’t be in it. Seeing the looks on the faces of happy attendees – that’s what keeps us all going. It’s hard to give that up.”