Grandmas are the cornerstones of many families. They’re often the ones who bring everyone together and are the matriarchal foundation for generations to come. In the case of sisters Jenny Chao and Emily Duddy, their grandmother is not only one of their greatest inspirations but also the reason their monogramming business, Gin & Kin, exists.

Chao and Duddy have always been each other’s closest confidants. The pair were inseparable even when Chao moved to Fort Worth, Texas, to start a monogram and embroidery business, Initially Yours, with a friend in 2013. Duddy and the rest of their St. Louis-based family missed Chao and constantly asked if and when she was coming back to the area. The two sisters had kicked around the idea of pursuing a monogram business in St. Louis in the distant future, and Duddy told her sister that if she came back to St. Louis, they could start in on their ideas right away. Ginny, the girls’ grandmother, was an avid supporter of the idea, and said that if Chao came home, she’d help them get started. 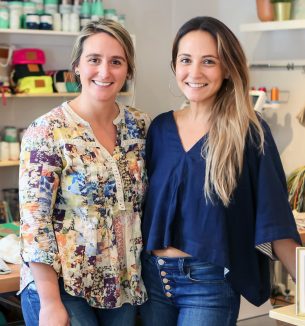 Chao agreed and made the move back to St. Louis in 2016 after being away for four years. Duddy, who went to school for textiles, was excited to start combining her keen eye for fabrics and colors with Chao’s enthusiasm for monogramming in all forms. Though she went to school for child and family development and early childhood education, her passion for monogramming led her to teach herself how to use embroidery machines and how to operate a business. Duddy and Chao decided to call their venture Gin & Kin, named after Grandma Ginny, and started creating in late summer 2016. For two years, they operated out of both of their homes, creating vibrant, beautiful monogram pieces amid the chaos of their lives. Duddy had just had her son, Miles, and Chao has three large rescue dogs. Then-87-year-old Grandma Ginny assisted her granddaughters in their work, helping in the cleanup part of the process by removing the backing and trimming threads. Working out of their homes weighed on both of them, and they considered looking for a storefront where their clients could see their creations in a professional, laid-out manner. In love with the Skinker/DeMun area, they would walk by what was then Dot Dot Dash Boutique, admiring the small but modern space.

“We knew we didn’t want a huge space, but we wanted a space where people could come see our products without having to come to our house,” Chao says.

They had decided to wait to open a storefront until Miles was in elementary school; however, in June of this year, opportunity came knocking.

“We knew the owner of the building [at 6334 Rosebury Ave.], and she called us to let us know the former tenant had decided not to re-sign their lease,” Duddy says. “She told us that we’re what she wanted in the space. Were we interested?”

Chao and Duddy’s years-off plan kicked into overdrive when they accepted and signed the lease. (Dot Dot Dash moved to a new storefront down the street off DeMun.) They moved their embroidery machines into the 362-square-foot space and opened their doors to the public at the beginning of September.

“It’s been a great outpouring from the community since we opened,” Duddy says. “We’ve had a lot of foot traffic, which has really helped us launch. We had good business and clients before, but it’s hard to take something super-seriously when you’re doing it out of your home. This makes it more substantial.”

Gin & Kin embodies its “personalization redefined” motto by offering luxe custom monogramming and personalized embroidery services. But they don’t just offer the basic three-initial scroll script. The sisters have an entire book of sample monograms that come in a range of fonts, numbers of initials, sizes and shapes. Customers can bring in everything from sheets to napkins to towels to have a monogram stitched on. Chao and Duddy also offer a variety of towels, blankets and other wares that can be embroidered. One of their favorites is the fouta, a Turkish towel that “gets softer with every wash,” Chao says. They also offer a variety of baby products, like swaddle blankets and heirloom gift sets. Monograms can be added to all items for $12 to $15, priced by scale of design, with one week to complete. The sisters are also able to turn an order around in 24 hours if needed.

“Jenny’s the monogram expert, and I help customers choose colors and fabrics,” Duddy says. “We make a great team.”

As they grow their business, the sisters are passionate about carrying products from women-owned, ethically made lines. They are also excited to partner with other St. Louis businesses down the road and have already worked with local designer Blair Dobson of Hello Dobson for embroidery.

In the end, though, their entire venture comes down to family. Duddy says she and her sister are “truly inseparable” and couldn’t imagine pursuing this project with anyone else.

Chao agrees: “We’d be with each other anyway, so we might as well be doing something fun with the community and small businesses.”

Gin & Kin is also about making their 89-year-old grandma proud. She sewed their graduation dresses when they were younger and taught the girls how to sew and crochet. When the sisters held a sneak peek opening, Grandma Ginny sat in a chair at the front of the storefront all day, making sure every person who walked in knew that she was the “Gin” of Gin & Kin.

“A lot centers around her and making her proud,” Duddy says. “This is her legacy.”