With a mission to inspire and enable all young people to reach their full potential as productive, responsible and caring citizens, the Boys & Girls Clubs of Greater St. Louis has started an incredible new endeavor: the Ferguson Teen Center of Excellence.

Just one year after celebrating its 50th anniversary in St. Louis, the organization took the first official step in launching a $12.4 million facility that will house everything from a nutrition-education center to a maker space. The sum involved includes construction and three years of operating. President Flint Fowler and nearly 150 other community supporters broke ground on the 26,856-square-foot building in September on the site of the former Ferguson Ponderosa. 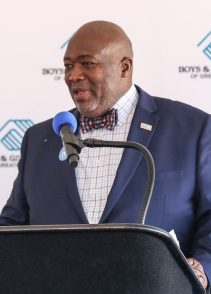 Once a plan was formulated, the Boys & Girls Clubs of Greater St. Louis launched a $25 million campaign to operate and partially sustain programs and services in north St. Louis County. As of Oct. 24, Fowler says the group is at about $17.7 million – all from a mix of private donations and corporate sponsorships.

After the official groundbreaking ceremony on Sept. 13, workers started initial foundation and cement work before winter arrives. They plan to open the facility at the start of the 2019-20 school year – in September or October of next year. The building’s design, done by local architecture and design firm ARCTURIS, includes a gymnasium, a teaching kitchen, a garden, a maker space/innovation center, an auditorium, a recording studio with video equipment, a game room, an art room and a fitness area. It will also include a counseling office, where a social worker can do intake work and meet one on one with individuals, small groups and families. It will offer after-school and summer programming to teens ages 12 to 18 in the North County area.

But it’s been many years in the making. The idea of a Boys & Girls Clubs facility in the Ferguson area first surfaced around 2012, and Fowler and his team had been working on a growth strategy to start some clubs in North County with the Ferguson-Florissant School District. However, they couldn’t find a lot of traction. When Michael Brown was shot and killed in Ferguson in August 2014 and rioting began, the Boys & Girls Clubs of Greater St. Louis began to get phone calls from concerned community members wanting safe spaces for their children to spend time outside of school. The organization received an initial call from the Ferguson Youth Initiative and opened a club in Ferguson Middle School in 2015.

They subsequently opened a second club at a neighboring school in order to house the middle school kids and the elementary kids separately. The following year, the group opened a club in the Riverview Gardens School District and Highland Elementary – two of the schools that were impaired by the rioting.

“More needed to be done,” Fowler says. “We always had it in the back of our mind to build this facility.”

The Boys & Girls Clubs of Greater St. Louis found that the missing element to these school-based clubs was the opportunity to serve teenagers. They decided to keep the school-based model for younger children and work on developing a space for teens that would be safe, attractive and pressure-free.

“In our research, teens like having their own space,” Fowler says. “They want to learn about career opportunities and get a chance to veg out with their friends. A number of teens in the area who aren’t participating in sports or other after-school activities are basically on their own until their parents get home from work. We wanted to be more intentional about serving that group.”

The location selected for the center gives the club an opportunity to serve not only Ferguson-Florissant teens but also those from Dellwood, Normandy and Jennings, as it sits equidistant among all those cities. Fowler and his team then set out to build a space that allows teens to prepare for careers, teach them about leadership and give them a chance to practice healthy lifestyles. The St. Louis club convened a group called Great Think to “facilitate innovative public-private collaborations,” according to the organization’s website. Great Think brought together community leaders and representatives from colleges, the military, law enforcement, nutrition, education and health care, to name a few.

“We broke them up into groups and talked about what the club should look like if you’re doing it through a teen’s eye,” Fowler says.

The groups brought up incorporating all aspects of STEAM (science, technology, engineering, arts and math), along with providing the young people with opportunities for careers and broadening their understanding of what’s available to them.

“We plan to assess each member’s career interest and aptitude [to] align work experiences, speakers and other activities with the education and training necessary to that field,” Fowler says. “What do they have a knack for, and how can we match that up to long-term career interests, and what educational experiences or training do they need to get there? We want to line up their interests and skills and flood them with opportunities to learn more.”

Another important component that came out of the planning was the leadership and civic-engagement aspect.

“One of the great things we saw come out of [the Ferguson riots] was the large number of young people [who] wanted to become active in their community,” Fowler says. “We see a lot of leadership coming out of young people in these communities where safety and opportunity are at risk. They’re holding officials accountable and are understanding how their voice can be heard. We want them to think about the things they can do to make their neighborhood better.”

Personally, Fowler hopes the center brings hope to the young people who access it and will help them be more successful in school, pursue their interests and be agents of change.

“If they are hopeful and inspired, they can carry what they’ve learned out into the larger community,” he says. “I hope the center brings about a sense of community that we’re all there to work for the betterment of each other.”