Since 2009, Period Restoration has been making a name for itself for its team’s ability to respect and restore the historical integrity of the Gateway City’s older homes. Co-founder Randy Renner Jr. has been passionate about breathing new life into these grand traditional houses for years, but nothing could’ve prepared him for what would become his largest challenge to date: the restoration of 4969 Pershing Place.

It all started in the summer of 2015, when Renner and his team were invited to take a look at creating luxury condominiums just off Kingshighway Boulevard.

“I thought the concept was incredible,” Renner says. “The space lent itself to what we were envisioning.”

The property at 4969 Pershing Place sits just inside a gate in St. Louis’ Central West End neighborhood, boasting a gorgeous façade and nearly 11,000 square feet of living space. It was built for a widow and her four children in 1902 – just in time for the 1904 World’s Fair in St. Louis – and was designed in the hôtel particulier style as a grand sort of town house. About 30 years later, the woman’s grandson designed what was later turned into three apartments – one on each floor of the house, with living quarters in the basement for a caretaker.

It was fortunate for the Period Restoration team that this division and conversion had taken place many decades prior, as the historic neighborhood otherwise wouldn’t have allowed the company to develop what would become three luxury condos with the guidelines set by the Central West End Historic District.

“This was kind of a one-time shot,” Renner says. “This was already set up as apartments, so we knew we could make them really special luxury condos.”

They began the tremendous project in winter 2015, starting with demolition.

“We reconfigured every floor to accommodate the new floor plan,” Renner says. “We wound up doing a lot of structural work.”

Perhaps the biggest undertaking was a $300,000 custom-built, four-stop commercial elevator and a 35-foot-tall deck that features space for every unit off the back of the building.

“There’s not a deck in St. Louis like it – and not just structurally,” Renner says. “We did the ornamental ironwork to match the Juliet balconies on the front.”

While creating a match like that can be tricky, for Renner, it’s just part of the job.

“Our specialty is old restoration work just like this,” he says. “We retrofitted new mechanicals and did all new plumbing and complete rewiring … new components that can be difficult to do in an old house.”

Another time-consuming aspect of the project was the building’s windows, all of which were restored. Renner notes that it took about 15 months to take out every window to be reglazed before rehanging it. 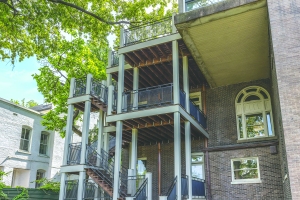 Though its architectural presence on the street is in itself stunning, the inside features even more unique and historical offerings. The first-, second- and third-floor condos are 2,209, 2,508 and 2,748 square feet, respectively, and feature intricate crown molding, open floor plans and ceilings that reach as high as 14 feet. Wood flooring has been meticulously restored throughout, and Period Restoration wowed with custom cabinetry and elegant marble countertops.

Renner and his team completed the restoration of 4969 Pershing Place in the fall of 2017. Open house attendees were wowed by the floor plan, bathrooms and kitchen spaces.

“It’s always rewarding when someone wants to purchase one of your products,” he says. “Everybody loved that building.”

The second-floor condo sold right away, and the third floor followed soon afterward. The first-floor unit was the last to sell, this past summer.

“We really pride ourselves in not just talking the talk,” Renner says. “A lot of people talk about doing preservation work, but we do it well and put in the money to do it. It’s very rewarding for us.”