Two years ago, St. Louisan Angela Giancola was living in Israel with her kids for a few months when she discovered a museum in Tel Aviv that had reusable decals everywhere. Her son, Omri, was obsessed with the stickers and the simple appeal of being able to create whatever he wanted from the decals, and he wanted to play with them for hours. Giancola inquired about purchasing some, but she learned they had been created by students specifically for the museum and weren’t for sale.

“I looked everywhere for this concept,” she says. “Then I thought I might as well just do it.”

Giancola is deaf and has a background in children’s education. Several years ago, she worked with international kids teaching sign language and art – which she says are common ways to communicate with children. “It doesn’t matter who you are or what kind of background you come from; there’s always art,” Giancola says. “I’ve always felt like it’s such a foundational way of communicating.” Also, she’d always wanted to open a children’s store but never felt the time was right. She ran the idea by Zoe Kaemmerer, a friend and former coworker of hers, who loved the concept.

“It was perfect timing,” Kaemmerer says. “I was at a point in my life where I was looking for something different, a challenge. [Giancola] and I had traveled together early on and built a professional relationship and friendship. It was an awesome ground to go forward, so we decided to go for it.”

The two friends set to work producing their own set of decals under the brand name of Honeycomb. They contacted a graphic designer friend to help with the project, noting that they wanted the shapes to be “free-form and abstract” so kids and adults could create something new in their minds.

“We want to challenge children to focus on their constructive and critical thinking and have fun with it,” Giancola says. “They can make letters, create pictures or just make simple shapes.” 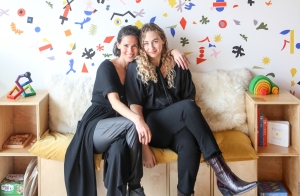 From there, Kaemmerer and Giancola took their idea one step further and decided to open a shop in St. Louis’ Botanical Heights neighborhood to showcase everything from the decals to unisex kids’ clothing to their own line of wellness and skin care products. Honeycomb has been open at 1641 Tower Grove Ave. since March 6, grabbing the attention of passersby with its bright yellow multiwindow “Honeycomb” lettering by local artist Phil Jarvis.

Visitors to the shop are greeted by a colorful and versatile space that features a play area for kids on one side and a more product-oriented space on the other. The shop is geared toward all ages, though, and provides a vibrant and tranquil atmosphere for customers, whether they’re 5 years old or 85.

“Visitors can expect a full experience,” Kaemmerer says. “It’s what we want to give our customers – an immersive, interactive experience, where they’re not only going to walk away with something as a gift, but they also had this positive and loving environment they got to be a part of. Maybe they met a new friend while they were in here or got some advice from another parent or walked away with an awesome, unique gift.”

Honeycomb carries a variety of lines from all over the world, with a focus on sustainability and quality. Visitors can find everything from a wheeled basket from Olli Ella to a balance board from Wobbel to organic toy blocks from Globe Totters. It was important to Kaemmerer and Giancola to focus on products that get kids off their screens and encourage being creative as a family, and those values are mirrored in the products they offer.

In addition to the toy-oriented products, Honeycomb carries a variety of kids’ clothing, including a piece from its in-house line, the Omri bloomers, named for Giancola’s son. She notes that kids can get two or three years’ of use out of the pants, which are designed to be rolled up or rolled back down as the child grows. The line also includes a burp cloth with a distinct shape that helps it stay on a person’s shoulder. It features the same design as the decals, tying it into the overall Honeycomb theme.

So far, Kaemmerer and Giancola say that feedback on their shop has been fantastic, with both adults and children enjoying the space and what it has to offer.

“The adults are so excited about the fact that they can come in and let their kid draw for five minutes while they take a stroll around the shop,” Kaemmerer says. “We’ve been blown away by the amount of people who already follow us on social media or have a sister or friend who’s been by the store. It’s an overwhelming feeling, and it makes us realize we’re on the right track.”

The pair also plan to use their storefront as an event space, bringing in speakers like psychologists, sleep specialists and teachers who have experience with special education. Giancola says she’d also like to do readings where she’ll demonstrate the books in sign language.

“We want to grow locally and in the sense of global business, reach out to people who have the same mentality and spirit as we do,” Kaemmerer says. “We want to represent everyone.”