Once upon a time, Melissa Carmean decided she wanted to foster a senior dog or one that had special needs of some sort. She and her family had previously fostered dogs when they were living in Texas, and when they moved to Missouri about a year ago, she began following Stray Rescue of St. Louis on Facebook.

“I got addicted to their posts,” she says.

Earlier this year, Carmean saw posts about a 7-year-old dog named Whippet who came to Stray Rescue blind in both eyes. He had glaucoma, and his eyes were rupturing. He had surgery to have them removed and went to a foster home to recover, since the shelter was confusing for the blind pup. Carmean saw his posts and “couldn’t stop thinking about him.”

“When he went up for adoption, I put in an application right away,” she says.

Whippet’s foster family was enthusiastic about the Carmeans coming to meet him, so Carmean and her husband went to pay him a visit and see if he’d be a good fit for their family. 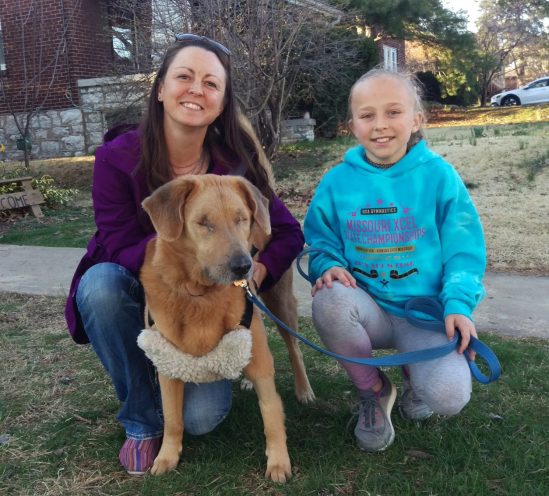 “My husband wasn’t totally sold on the idea, but when we walked in their door, he was the first one on the floor with [Whippet],” Carmean says.

After a brief discussion with her husband, Carmean filed with Stray Rescue to officially adopt Whippet. They brought the pup home the same day.

The Carmeans have had Whippet only for a few weeks, but he’s fitting in perfectly with their family. Whippet’s getting used to having a dog brother and sister, along with a sassy cat sister. Carmean says that aside from his blindness, the Golden Retriever-“ish” pup is “as healthy as can be.”

“He loves to go for walks,” she says. “He just wants to be wherever you are.”

One little bit of adjustment the Carmeans have faced with Whippet is talking to him constantly to let him know where they are in the house.

“You can’t leave a room without telling him you’re leaving the room, because he won’t know where you went,” Carmean says. “You just have to keep talking to him so he can follow you. His sense of hearing is great.”

Whippet has been particularly excited about meeting the Carmeans’ cat, but so far, the cat has insisted on swatting at the visually impaired dog until he backs away.

“He just really wants to sniff her,” Carmean says. “As soon as she meows, he’s got to go find her.”

Overall, though, Carmean says the biggest adaptation is just being mindful of Whippet’s presence because he’s so quiet and low-maintenance. The Carmeans have incorporated him into their daily routine with ease, though, allowing Whippet to come along on car rides to pick up their daughter from school.

“Seeing him with his head out the window is so cute because he loves the feel of the wind on his face,” Carmean says. “He can’t tell what’s going on, but the expression on his face is so sweet.”