Years ago, Jennifer and Dave Kube bought a 1963 Airstream trailer so they could take their then-2-year-old on outdoor adventures with ease.

After a few expeditions, Jennifer Kube, a hairstylist, began to wonder if an Airstream could be converted into a mobile hair salon. She’d been in the business for nearly a decade at that point and saw similar concepts popping up on the West Coast, including a San Diego franchise. Intrigued, Jennifer Kube flew to California to see what the fuss was all about – and came back more motivated than ever to make her vision of creating the Midwest’s first mobile hair salon a reality.

After discussing the idea with her husband, they decided to keep their family Airstream and locate a new one to be converted to the salon. Some searching led them to a potential unit just outside of Kansas City.

“Someone had bought [a 1967 Airstream] and was trying to fix it up to take for family travel,” Jennifer Kube says. “But they decided the project was too much. Most of [the inside] was removed, and it had a clean slate.”

It would work perfectly for the Kubes’ project, though. Four years ago, they purchased the second Airstream and started on the long road of work ahead of them.

When asked what kind of labor had to be done to the Airstream in its condition when they purchased it, Jennifer Kube’s first response is “everything.”

“Plumbing, electricity … It all had to be done,” she says. “We didn’t know anyone who had done anything like this, so we had to get creative and find ways to do things and think outside the box.”

Aside from the electrical work, which they hired someone to install, the couple did most of the restoration themselves. Dave Kube has a carpentry background and years of working on TV and movie sets under his belt. But this project challenged even him. 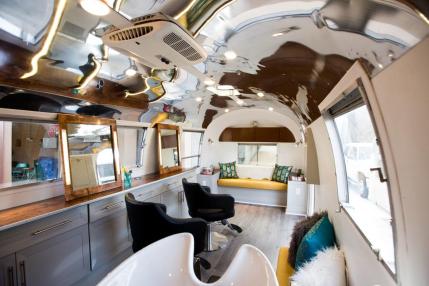 “The panels had been taken out and piled inside the trailer,” Dave Kube says. “The windows were smashed out and replaced with plexiglass. From the time we bought it, it was a three-year process [to complete].”

Part of the delay was due to a seven-month job in Chicago for Dave Kube, but when he returned, the couple poured their hearts and souls into converting the vintage trailer into a top-of-the-line mobile salon.

In late 2017, The Clipper Mobile Salon made its debut at Sasha’s on Shaw. The Kubes had just finished the build-out, which included room for two stylists to work within the state board of cosmetology’s regulations. They weren’t offering services just yet but wanted to get the local community excited about the newest business on wheels. A few weeks after the debut, the Kubes got the trailer inspected, and it passed.

Over the course of the past year or so, The Clipper Mobile Salon has made its way across the metro area, offering blowouts, updos, dry trims and waxing for special events, milestone birthday parties and “blowout” bars. Jennifer Kube says her customers are often bridal parties, which book the salon to pull up to a wedding location for the bride and her entourage for styling and makeup.

Between managing The Clipper Mobile Salon, hosting Clipper events on weekends and still doing hair full time for her own clientele, Jennifer Kube stays very busy, effectively working two jobs. “Now that the weather’s warming up, there’s usually an event once a week, whether it’s a wedding or a pop-up,” she says.

Giving back to the community that’s been so supportive of their vision is also a priority for the Kube family. At the end of March, The Clipper Mobile Salon worked with Suits for Soldiers to offer complimentary haircuts for veterans and active and retired military members. Jennifer Kube has also worked with Ranken Jordan Pediatric Bridge Hospital to cut patients’ hair and is looking to expand her volunteer services further into the local community.

“It’s the first mobile salon in the Midwest as far as I know,” she says. “It has such a fun vibe to it. Most people haven’t been in an Airstream at all, let alone a mobile salon. We get a lot of people who aren’t even interested in the salon but will come up to us asking about the van, saying, ‘My grandma had one of these!’ There’s something for everyone to be interested here. And we can come to you.”