Once upon a time, a 7-year-old terrier mix was found shivering in an abandoned garage in North City, sleeping on a bag of trash. Winter of 2014 was a cold one, and Stray Rescue of St. Louis volunteers were doing their best to get as many strays off the streets as possible. They were desperate for foster families, and Valerie Andrew answered the call for the terrier mix, named Maloney.

Andrew had fostered for Stray Rescue many years prior and had adopted her older dog, Friede, from them. Stray Rescue told her she could come down to the shelter the next day and to bring Friede to the meet-and-greet room so they could all get acquainted.

The dogs got along just fine, and Andrew agreed to take Maloney home as a foster. He was extremely skittish. Andrew says although she doesn’t know much about his life before ending up at Stray Rescue, she’s pretty sure he had been abused in some way.

“He was afraid of everything,” she says. “He ran away down the street the first day, but the Stray Rescue folks helped get him back home.”

The first days were rough for Maloney and his new mom. Andrew worried he would never bond with her. She turned to the folks at Stray Rescue for help, and they recommended putting peanut butter on her finger.

“That did the trick,” she recalls.

While fostering Maloney, Andrew took him to a few adoption events, which is a customary practice for dogs in foster care.

“I was so afraid someone was going to be interested in him,” she says. “That’s when I knew I had to keep him.”

Maloney got to be one of the Stray Rescue All Stars at this past December’s Hope for the Holidays Gala at The Chase Park Plaza and is featured on the organization’s calendar as Mr. March.

“People are really attracted to him because of his speckled nose,” Andrew says. “Then, once they get to know him, they realize what a sweetheart he is.”

Andrew and her four-legged crew belong to the Woodson Road Dog Park in Overland, and Maloney loves getting to meet new friends there.

“He loves to chase with the other dogs, but his favorite thing is just to get a squeaky toy and parade around with it,” Andrew says.

Maloney has been a bit of a menace to Andrew’s garden. It turns out, he loves broccoli and kale, and will eat both right off the plant.

“He also loves orange slices, but only if you eat half of it and give him the other half,” she says.

Andrew describes her life as “richer” now that Maloney is in it. She has other animals that she adores, but something told her it was time to do something more and foster.

“Every day is something new and exciting,” she says. “Who rescued who?” 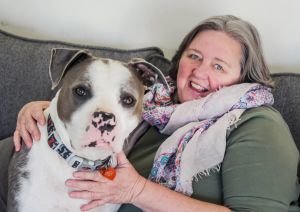