Once upon a time, Myers Dill had a bad habit of looking at Petfinder – all the time. He and his wife, Christine, had gotten their first dog, Chief, from the website, so he was always perusing it, looking for a friend for Chief.

“About once a month I’d send [Christine] links, saying, ‘Chief wants a sibling!’” Dill says. “She’d reply with a ‘ha-ha,’ and it wasn’t really something we had seriously discussed.”

He sent his wife a link to a dog named Kiwi, a pit bull terrier described as “as sweet as the fruit she shares a name with.” She was rescued in July 2015 by Even Chance Pit Bull Rescue, a St. Louis-based organization that seeks to counteract misinformation about pit bulls with factual education, communication and resources. Even Chance rescues pit bulls from area shelters and provides foster care for rescued dogs until they find their forever homes.

“Kiwi had a whole extended profile that sounded a lot like Chief’s personality,” Dill recalls. “The whole Even Chance mission was attractive to us, so we set up a meeting for Chief to meet Kiwi.”

The meeting went well, and the Dill family took Kiwi in about a week later for a trial run. Even Chance worked with them to make sure Kiwi was a good fit for their family.

“They were so accommodating in making sure the home was a right fit for her,” Christine Dill says. “They set up a training session for some things we were trying to work on and gave us a lot of great resources.”

In October 2015, Kiwi had found her forever home and was renamed Maddie.

Though they don’t know much of Maddie’s backstory, they do know that she was found in a shelter in East St. Louis. The Dills think she’s been in a home before, because she knows basic things about being in a house. But other than that, her background is murky.

“We think that maybe because of her squirrel obsession, she got away from someone,” Dill says.

Having two dogs has been a lot of fun for the Dill family, and Chief is enjoying his new little sister.

“It’s different having two dogs,” Dill says. “Maddie is a great playmate for Chief, but Chief is seven years old, and Maddie’s only two. She has a ton of energy.”

The Dills talk about the dogs playing in the backyard with endless energy. They say Maddie gets along great with other dogs and loves to cuddle, too.

“She wants to be on your lap all the time,” Dill says. “She’s added so much fun and excitement to our lives.”

Maddie does have a bit of a squirrel obsession, as noted, and will sit at a window and watch them for hours. Dill says she even got a few feet up in a tree one time chasing after one.

She also specializes in completely destroying all toys.

Despite this fearlessness, Dill says Maddie’s also a diva.

“Something will fall in another room, and she’ll run in to see what happened. I carry her around over my shoulder a lot. She’s a strong, dominant dog, but she’s also a big baby,” he says. 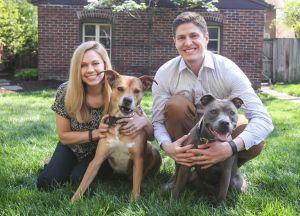