Andy Busch was born into a beer empire.

The son of the late August Anheuser Busch Jr., Busch grew up around Anheuser-Busch brewing company and Grant’s Farm.

Pursuing a passion for polo, for which he was asked to serve as captain of the U.S. team representing America in the World Cup, Busch and his wife, Kim, began visiting the Santa Barbara, California, area in 1998. Four years later, the Busches made the leap and moved their family from St. Louis to nearly 2,000 miles away.

The couple wanted to find a ranch and land to purchase – something that reminded them of Grant’s Farm and of home to keep their children grounded in working on the land. Over the next two years, they looked at 50 ranches, but none of them felt right. Then, in 2004, they came through the gate of a property they were touring and knew it was going to be their next project, later purchasing a contiguous ranch in 2011.

But the property was perfect and reminded the Busches of Grant’s Farm. It had once belonged to the Morton Salt family and was called Folded Hills because of its location in the folds of the mountains. As the crow flies, it’s only 5 miles from the ocean. After learning more about the property, the Busches found out that there had been a vineyard on the hillside of the property and that wine had been made in the basement of the farmhouse during the pre-Prohibition era. (The farmhouse in question will be the estate tasting room, set to open in spring 2019.) Learning this history, the couple brought in experts to research the land and climate to find out what they’d be able to grow.

“The land told us what it wanted: Rhône varietals,” Kim Busch says. 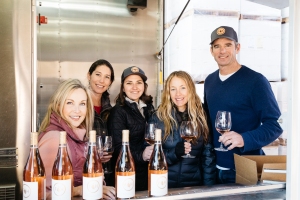 And Folded Hills Winery was born.

Andy and Kim Busch approached their new venture from a land perspective. They sought to keep the acreage organic and agricultural, and wanted to “honor the valley,” according to Kim Busch. “The grapes are remarkable; the growers can’t believe it,” she says. Along with meticulously researching the terroir to discover which grapes might grow best in the soil and climate, the family also made many improvements to the property.

Folded Hills is a 600-acre working ranch and comprises 12 acres of Rhône reds, including grenache and syrah; 3 acres of Rhône whites, including the grenache blanc, marsanne and clairette blanc; and land for cattle, pigs, chickens, Clydesdales and 15 acres of organic row crop vegetables and fruits. The property also features a polo field for one of the Busch family’s favorite hobbies, hosting games weekly during the summer.

They launched their first set of wines more than a year ago in St. Louis – all named for members of Andy Busch’s family or Grant’s Farm. The Lilly Rosé is an estate rosé named after the numerous generations of Lillys in the Busch family.

“There are six generations of Lillys in our family, all the way to our daughter and granddaughter,” Kim Busch says.

She notes that many people dislike rosé because it’s typically a byproduct of making other wines. But at Folded Hills, the vintners both plant and pick specifically for a crisp, dry Provençal-style rosé. This deliberate process led to Folded Hills’ rosé being named “year’s best rosé” by Wine & Spirits magazine.

The winery’s collection also includes a 2016 Estate Whole “Cluster” Grenache, which honors the traditional Beaujolais style; a 2015 Grant Grenache named for Grant’s Farm and Ulysses S. Grant, which was named the best grenache in California and top tree in the U.S.; a 2015 August Red Wine that pays homage to Andy Busch’s father and grandfather; an August White blend; and two reserves of Ballard Canyon Grenache and Syrah.

The Busches hired New Zealand winemaker Angela Osborne and grower Ruben Solorzano, who ensures the best picking times and the highest-quality process that honors the land where the grapes are grown organically and biodynamically, which Kim Busch describes as “a very natural style of winemaking that allows the quality of the grapes and terroir to speak for themselves.” As the winery’s website states, “It’s all part of our promise to make wine in an honest, time-honored way.”

On top of the day-to-day vineyard operations, a typical day at Folded Hills is anything but.

“A ‘typical’ day for me at the ranch could be anything,” Andy Busch says. “It could include maintaining the polo field, clearing roads for cattle, baby pigs being born, doing a wine tasting, greeting guests … anything that needs to be done.”

Andy and Kim Busch are in the process of remodeling the 100-year-old farmhouse on the property, which, as noted earlier, will open in spring 2019 as a tasting room. They encourage visitors to visit the ranch and feed the animals, pick their own produce and tour the vineyard. Interested parties should contact info@foldedhills.com for a private wine tasting.

Kim Busch says she and her spouse love having St. Louis friends out to the property and look forward to the ranch’s continued growth. It was also important to the Busch family to have Folded Hills wine available locally, and it can be purchased at a dozen St. Louis retailers and restaurants (see sidebar).

“If you enjoy what you’re doing and the people you are sharing it with … getting a table together and enjoying a farm-to-table meal and getting out in nature … that’s what this is all about,” Kim Busch says.

“Gussie’s motto is ‘making friends is our business,’” he says. “We’re trying to continue that on with this wine.”