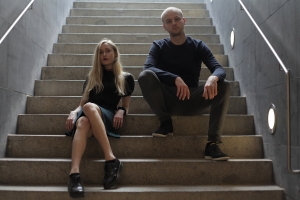 Tim Schaufert and CASHFORGOLD have collaborated on more than a dozen songs since they began releasing tracks together last spring. The German producer’s and Detroit songstress’ styles come together brilliantly from across the sea, blending into a glowing atmosphere that’s simultaneously ethereal and eerie. From last November’s “Gold” to July’s “Awake,” the duo demonstrate a perfect mastery of a style that’s all their own.

In their latest piece of work together, “Always High,” Schaufert and CASHFORGOLD spin a mysterious and complex web, packed with melancholy chords, wistful vocals, and a subtle trap beat.

DA caught up with Schaufert to hear about his production process with CASHFORGOLD’s Jacqueline Torgerson and what he has in store for the remainder of the year.

What has your evolution been like as an artist over the past few years? What’s most important to you as an artist?

In my teens, I listened to minimal and house, which is very prominent in Germany, but took a complete shift in my listening and producing habits two years ago. After a break from electronic music due to university and mental health stuff, I came back in 2016 and started all over. I got disinterested in house and instead got into chill and wave music. I started taking music seriously and since I couldn’t stand studying and not doing something creative any longer, made the decision to pursue it professionally.

What is your production process like when you and CASHFORGOLD work together?

I usually start by making an instrumental, either a loop or a quick sketch of an arrangement, nothing too complex. The chord progression is the important part for Jacqueline to write the vocal to. After the vocal is recorded the song can take on a lot of new directions. I’ve been enjoying working this way, because it gets me to think more creatively and try out different song structures and styles. If I planned out everything in advance, it would more formulaic.

How do your styles fit together?

The great thing is that they don’t always line up, so we force each other to be open in that way and try out ideas that you wouldn’t have tried when working on your own. This comes with obstacles, but I much prefer it to becoming stagnant.

How would you describe your music in three words to someone who’s never heard it?

CASHFORGOLD and I have our first EP coming up in July, which I am very excited about. It’s got a dark, witchy theme and the EP format glues that side of our sound together. The weeks before and after that are filled with singles, pretty much every Friday there will be something new.

If you could play a show anywhere in the world, where would it be?

In the middle of a hillside, in a warm evening in spring. Not a huge crowd, intimate. My focus has very much been production, so I actually haven’t played a single show since 2016, but maybe that’ll change soon.