In mid-July, an enticing cover of Fleetwood Mac‘s iconic “Dreams” made its way onto SoundCloud. Captivated listeners, upon clicking on the source, found the dreamy cover to be the one and only track on the channel. 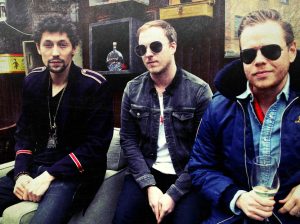 The channel belonged to Jaguar Dreams, a Brooklyn trio comprised of Ben Eberdt, Michael Kelly and Tim Kiely. In their “Dreams” cover, the group used “simple instruments and modern machines to feed the primitive appetite for dance.” This reasoning came from a trip to the Amazon rainforest, where the three were inspired by the story of the jaguar dream. In the ancient tale, journeymen would trade consciousness while in the jungle and have their souls overtaken by the animal. Re-energized upon returning to New York, Eberdt, Kelly and Kiely embarked on their Jaguar Dreams venture — writing, producing, and illustrating every aspect of their new project themselves.

Two months after the release of “Dreams,” Jaguar Dreams have unveiled their debut original, “Just Life,” which stems from the same undeniably authentic vein as their cover. Emotive harmonies usher the listener into a lush landscape of wistful synth melodies, evoking feelings of nostalgia and times gone by. They call “Just Life” a “bittersweet reflection” — and rightly so.

We caught up with the up-and-coming trio to hear about their journey thus far and what the future holds.

Why did you choose to cover Fleetwood Mac for your debut release?

We had a week there where we were reimagining a bunch of classic tracks. We’d spin records until we heard something that felt right to us, then we’d try to reinterpret it. We wrote a handful of songs that week, but “Dreams” felt like a good way to introduce ourselves.

How is the cover different from your debut original, “Just Life”?

Original music is kind of personal by definition as it comes from someplace within. With a cover, you just want to find a way to reinterpret something that you love. So the process is totally different for each song. With “Dreams,” we made something new out of something old, but with “Just Life,” we’re making something new out of nothing.

What does “Just Life” mean to you? What was the inspiration for the song?

It’s just a bittersweet reflection. It’s impossible to capture everything, so we did our best to capture a glimpse in a few minutes of music.

Who would you name as your inspirations as artists?

How would you describe your music in three words to someone who’s never heard it?