Karen Hill is mom to three children under the age of 6. She has a 5-year-old son and 3-year-old fraternal twins. When her daughter was born, she became fascinated by the array of cute clothing available for little girls; however, she still felt inspired to craft some of her own.

“I’ve always been crafty,” Hill says. “I can’t even remember when I learned how to sew, but it’s been a long time. I remember learning cross-stitch when I was maybe 8 and making Christmas gifts for my family.”

Hill had attempted making clothing for herself years ago, but she found that “children’s clothes are much more fun and quicker to sew.” She soon filled her daughter’s closet with her homemade creations and knew something had to be done. 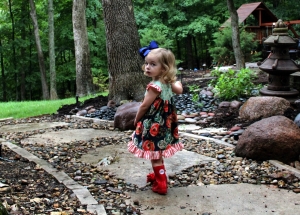 “There was only so much that a little person can wear in [his or her] life,” she says. “That’s when I started reaching out to make things for others.”

Hill started Olive + Peony in spring 2016. She named her children’s clothing business after two things that bring her joy.

“I picked ‘olive’ because my dream place to live is Italy, and the peony is one of my favorite flowers,” she says. “The name reminds me of things that are beautiful. I want to make things that are pretty and bring people joy.”

In her online store, customers will find a colorful array of little girls’ clothes. She specializes in the preschool to grade school range, which is usually sizes 2T to 6Y. As she’s been making more clothing, though, she’s grown in her sizes and has started making clothing on both ends of the spectrum, such as clothes for babies and preteens. Her homepage currently showcases three rompers with fun prints like poppy flowers and gingham. Flipping through the website’s options, visitors will find everything from tunics to petal shorts to skirts and even some boys’ clip-on bow ties and holiday belts.

“There are a lot of play clothes I like and a lot of dressy clothes I like on the market,” she says. “I try to have mine not too overly done … cute things that can be worn for every day. That’s the spot I try to hit.”

Hill says now is a great time to be a crafter because of all the fit-tested patterns available online.

“There are so many bountiful clothes designers with PDF patterns,” she says. “You can find almost anything you want. I’ll often splice things together, too.” 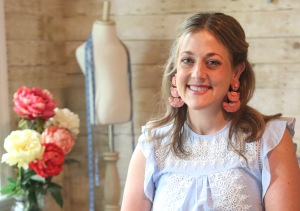 Hill does all the sewing herself and prewashes the clothes in a gentle detergent free of dyes and perfumes. She tries to use 100 percent cotton fabrics as much as possible. In addition to what’s available at oliveandpeony.com, Hill is constantly working on custom orders, as well.

“It’s funny because when I started doing this as a business, I said I’d do a ready-to-ship line,” she says. “Three kids in a year and a half doesn’t give you a lot of spare time. But now I laugh at that idea because my custom orders are half – if not more than half – of what I’ve been doing. It’s fun, though, because I get to do outfits for family photos or birthdays. It means a lot that they’ve chosen me to dress their kids for photos that’ll last forever.”

Repeat customers make up nearly half of her business, too, which has led Hill to develop lasting friendships with the parents who order the clothing for their kids. As a stay-at-home mom running a small business, she says she was surprised at how much she missed working in a professional environment and having that constant interaction with peers and co-workers.

“It’s been fun for me to have this as a way to still stay in touch with the outside world,” she says. “I’m so appreciative of everyone who’s been supportive of me.”

“It’s hard to do cute patterns for boys,” she says. “I would love to do more knit prints for babies, too. And more sibling sets.”

In the near future, Hill is excited to sell her wares at the Kirkwood Greentree Festival on Sept. 15 and 16.

“I haven’t done a lot of shows, but this will be a great chance for people to come by and see the pieces in person,” she says.